We had a list of bucket shots and places we wanted to visit and we’d try to squeeze in as many pictures as possible. One of the last places we wanted to visit was over the town of Funninger. It’s a popular image on the Faroe Islands and it can make for a fantastic picture. As we drove to the small town the weather was not cooperating, which is typical for the Faroe Islands. A saying on the islands; “if you don’t like the weather, wait 10 minutes”. After visiting there, it’s not an exaggeration.

To get the image we wanted we had to park the car on the side of the road and hike about 15 minutes to the crest of the hill. Once there, you have a spectacular view of the small village of Funninger, with the beautiful mountains and fjords in the background. When we arrived we had a nice sunny day as we started our hike. When we got to the top, naturally, the weather took a turn for the worse and it started snowing/sleeting. So we packed up, hiked back down and waited in the car for another clearing in the sky. After an hour or so we saw another blue patch coming, we packed up our gear and went back up. Again, poor timing because when we got to the top, the weather turned and we missed our opening. So again, we hiked back down and waited in the car. We thought we’d wait there a little longer and hope for another break in the weather. Sure enough, a short time later we saw a break and we decided to go up for our third (and last) attempt at getting this picture. This time we left a little earlier hoping to time the weather a little better. We get to the top and waited out the weather until we had our clearing. It wasn’t looking promising so I put my camera bag, tripod, and camera on the ground. I was yelling at Brace approximately 40 feet away but it was too windy and he couldn’t hear me. So I walked back to him saying I wanted to wait another 10 minutes and if it didn’t let up, we’d call it a day and go somewhere else. As I’m talking to him a huge wind gust comes up and I see my camera bag start to roll towards the edge of the cliff. My first instinct was to run after it, which I did. As I’m running I feel the wind pushing me towards the edge as well so I immediate fall and sit down. As I’m sitting there I see my bag slowly rolling over the edge. Sadly I had to just watch it go over and there was nothing I could do about it.

After sitting there in disbelief, I realize what just happened and started to swear a little. I walked as close as I could to the edge but it was still too windy and I couldn’t see over the edge. It was gone, over the side of the cliff and sitting on the side of a mountain. I have no idea how far it would have rolled down and accepted that it was gone forever. I then picked up my camera and tripod off the ground and was thankful I didn’t go over with it and I’m still alive. We then took a few more pictures, got the shots and left. Sadly, the pictures weren’t even that good. We then drove to our next location on the trip. I was probably a little quiet, taking in what had just happened, making a mental note what was inside the bag. So I just lost my camera bag, the Think Tank Streetwalker Hard Drive, Canon 24-105mm, Canon 8-15mm Fisheye, the DJI Osmo and some other miscellaneous items (filters, batteries, etc). Luckily I had taken out my Canon 70-200mm and the Canon 14mm to save on weight for the hike. I still had my camera and the attached 16-35mm. If there’s any lens I needed to have the rest of the trip it was the 16-35mm f/4 so I felt a little “fortunate” because we still had another 9 days left. The rest of the trip went by without incident and the daily joke was “remember when your bag blew off the cliff?” All we could do was laugh.

So 7 months later I’m in bed and my wife shakes me, “your phone is ringing”. It’s 3:30am and it’s a call from a number I don’t recognize and I let it go to voicemail (no message). An hour later, it rings again, same number so I decide to answer it. It’s the Faroe Islands police department. They ask for Brad Rempel, so I say it’s me. My immediate thought was I was in trouble, I got a ticket, or there was something wrong with my rental car. They then tell me that someone found my bag and they wanted to make sure I was alive and wasn’t a missing person. At the time I never thought about reporting the bag missing because I felt stupid losing it in the first place. I never thought anyone would ever find it. They start asking me some personal questions, like my birthdate, when I was there, where I live, etc… I immediately think it’s a phone scam so I ask if I can call them back when it’s not 4:30am and I can actually think.

Sure enough, later that morning, I google the Faroe Islands Police Department, I call them back and they had my bag and there were things in it. I don’t think they really knew what was in there, just stuff. We agreed that they’d ship it back to me as soon as I transferred $90 USD to them. It wasn’t that easy transferring money and it ended up costing me an additional $50 from my bank but screw it, I wanted to see the bag and the gear!

A couple weeks go by and I’m walking out the door to go to work and there it is, at my door, my bag. Holy shit, it’s here but I couldn’t look because I needed to get to work. My second thought after seeing my bag is “WTF? Why didn’t you pack it in a box!?” They just slapped a label on the bag!

So I finish taking pictures at the Twins game, tell everyone there what happened and get back home. First thing I do is try the Osmo. I figured it was in a case, inside the bag, and it had the best chance of surviving 7 months, in the winter, on the side of a mountain, in the North Atlantic. I turn it on, battery is dead. I run upstairs, find another battery and plug it in. Amazingly, it turns on and it works. I’m shocked. I then take the lenses out and give them a quick look over. The caps were knocked off with the front elements exposed and they looked a little dirty. I give them a quick wipe off with my shirt, and put them on my camera. Holy shit, they seem like they work perfect. I can’t tell if the focus is off, but the motor and the zooms work fine. I’m giddy and in total disbelief. I can’t believe my gear stayed protected in the bag all winter long. Obviously I’ll recommend this bag to anyone now. 5 stars!

Since I lost this gear, I had already replaced the Think Tank bag with the newer version 2, replaced the filters and bought the battery I lost. My gear was insured, so there was a claim. I have separate camera insurance and they covered the lenses and the bag, but everything else wasn’t listed on my insurance so it wasn’t covered (my fault, not the insurance company). I also contacted the insurance company and tell them the story how my items were found and sent back to me. After talking to them, they just wanted the lenses and the bag back. If I wanted, I could buy them back. I declined. 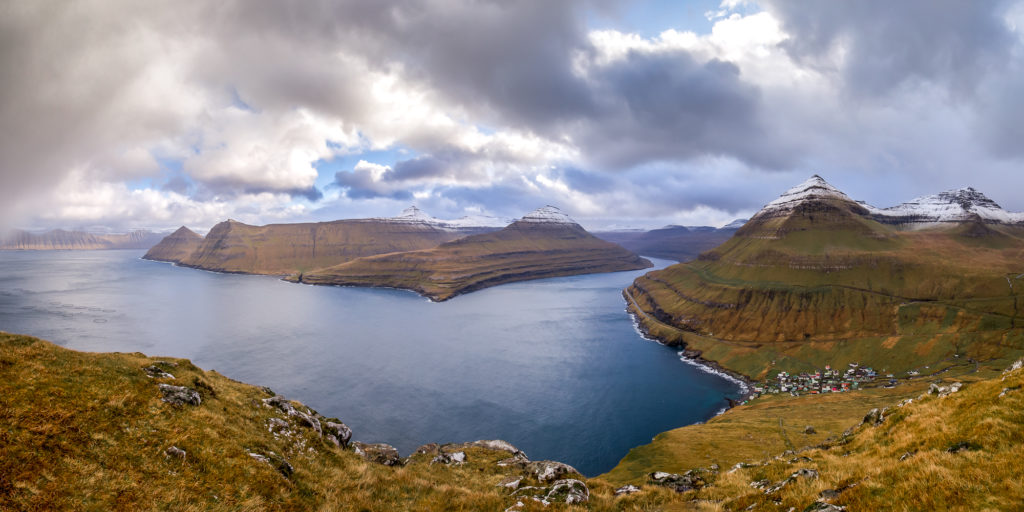 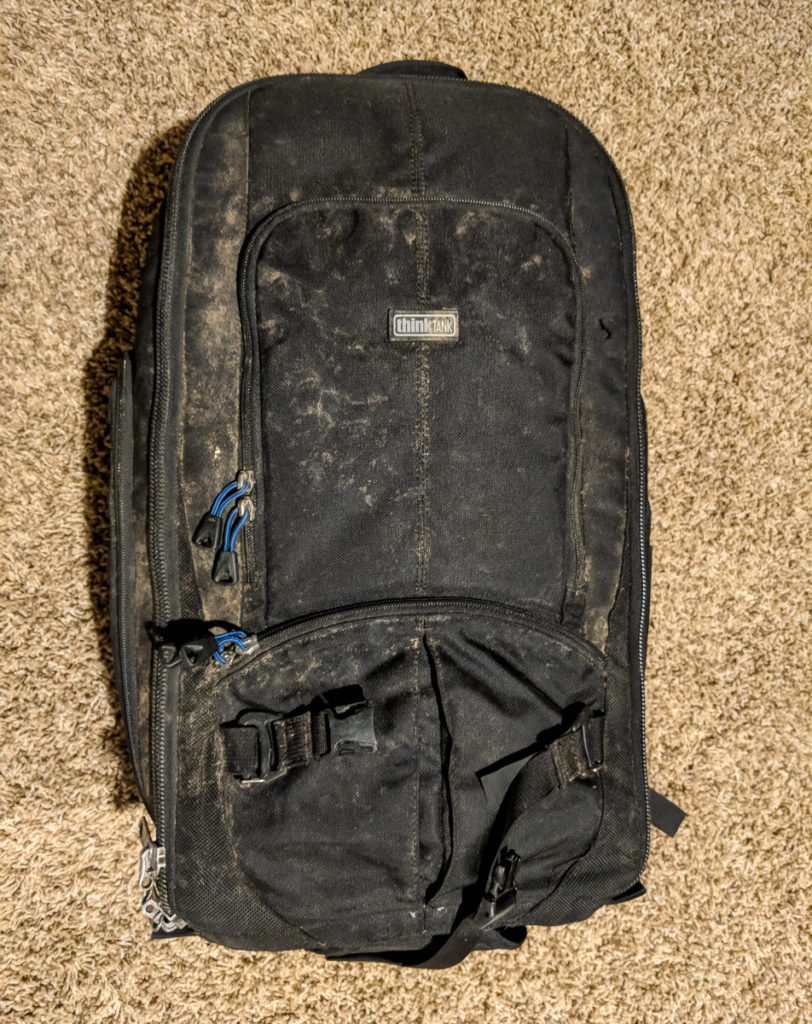 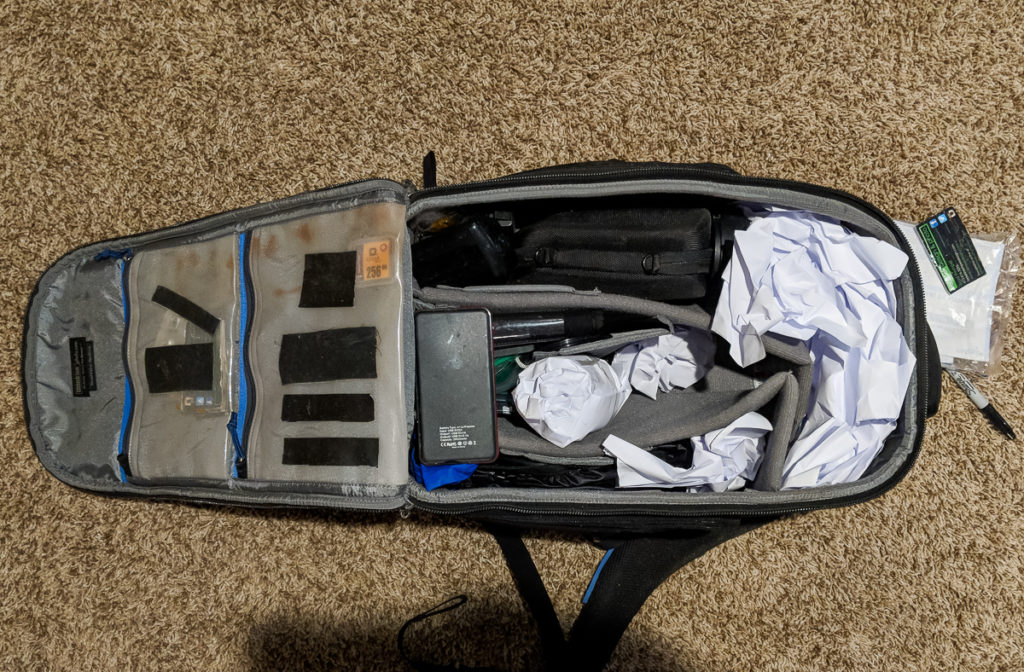 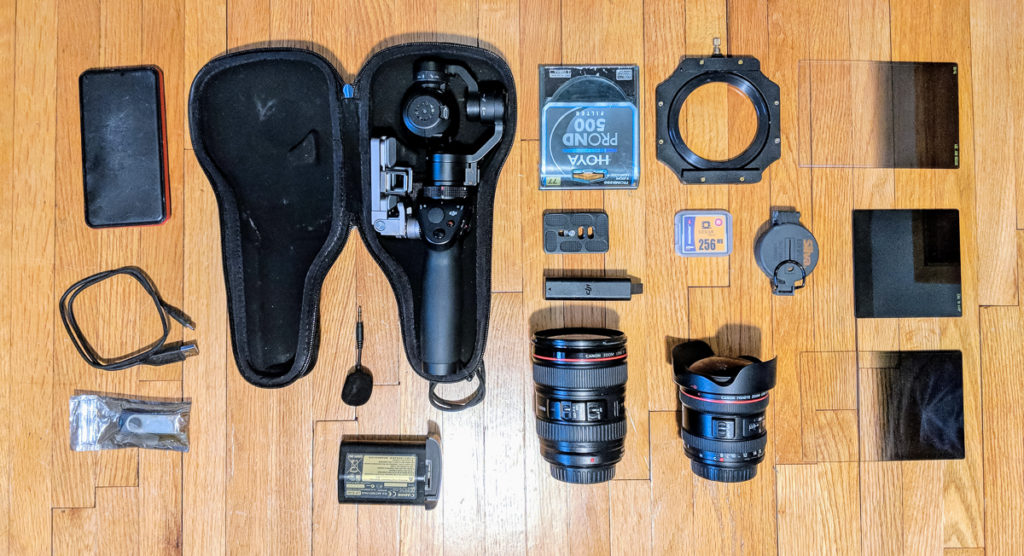